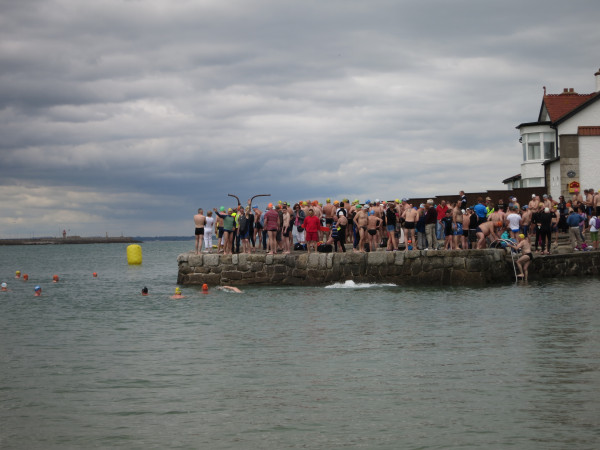 Last Sunday I was invited by a friend to partake in a sea swim in Sandycove. Although I'm a regular swimmer and surfer I had never done a sea swim but was prepared to give it a go. The sea was packed with about 300 men mostly in Speedos who seemed un-phased by the 12 degree water temperature. I found my body not adjusting as quickly as I had hoped. The event started and I struggled to get a rhythm and could not get my breathing, it is a different technique to pool swimming and after about 400m and observing others I worked out a technique.

About 300m from the end I did not feel comfortable and drifted towards some rocks where I climbed out and sat on the rocks, my plan was to walk back to the start/end race point. A girl saw me getting out and waved to me to see if I was OK, I waved back to let her know that I was fine. When I tried to stand up  I couldn't, I had lost all feeling in my legs and then went to raise my arms for help but these would not work either (reminded me of my son’s expression ‘legs not working Daddy’ when he wants a carry). The girl and her boyfriend were about 50m away across the rocks but she knew something was wrong and started sprinting over, while her boyfriend waved the life-boat. When she got to me she realized that hypothermia had set in and rubbed and hugged me to keep me warm while the life-boat came over.

The civil defense was careful to lift me into the boat in a seated position so as to allow my legs to extend could have caused cardiac arrest. I lost consciousness and regained it in the lifeguard hut where I felt I was going to die, apparently I started shouting ‘I have a wife and small children they need me!’, a few moments later I became aware of my body shivering and my teeth chattering and let out a yelp of ‘yes I’m going to live’.